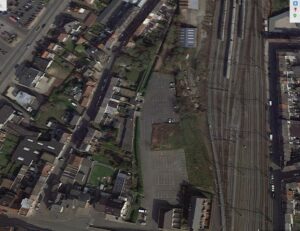 Geraardsbergen. Groen Geraardsbergen argues for a housing policy geared to the needs of the residents and not to the promoters and developers for whom “selling” is a priority. The Flemish government (?) had the ambition not to allow construction on open space from 2040. The question is whether this ambition can be maintained. Open-VLD and N-VA no longer consider it a priority,” said Patrick Francois van Groen. “In Geraardsbergen, the proportion of built-up land keeps increasing, as if they want to hastily fill the remaining open space.” The text below is by Patrick Francos.

A study on housing was conducted in the context of the “Demarcation of the Small Town District of Gerardsbergen”.
The housing study examines four scenarios.
In the first scenario, it is still possible to build outside of flood-prone areas and in easily accessible places (proximity to the station, connection via slow roads to the center). Taking into account the vacancy rate and current projects, there is therefore room for an additional 1,879 homes.
The second scenario takes into account the growth in the station villages (Center, Moerbeke, Schendelbeke, Idegem and Zandbergen), housing expansion in Denderland Shopping, Sint-Machariussite (Reepstraat-, Unalsite and Between Lock and Grotestraat. There is thus room for 1,912 housing units.
In the third scenario, a radius of 1 km is used instead of the 500 meters used in scenario 2. There is room for 1925 homes.
For the fourth scenario, the third scenario is taken, the least possible projects located in strategic or potential locations. This means the residential expansion of 1,063 homes.
Even with this simple scenario, future housing demand is being met.

Then this study reached a number of conclusions:

Higher construction and densification in Geraardsbergen and its sub-municipalities
At the request of the city, a report has been prepared by “BUUR” in which high-rise buildings are allowed in strategic areas, provided that they have an added value to the environment.
Also in the station villages (Moerbeke, Schendelbeke and Idegem) limited higher building is allowed if there is an added value to the village.
In Zandbergen, Ophasselt, Nederboelare, Goeferdinge, Overboelare and Viane, higher building is allowed to a limited extent in strategic areas, provided that this provides an added value to the village.

Groen Geraardsbergen’s notes
Studies contradict each other
The BUUR study does not take into account the results of the residential study at all.
Very limited account is taken of the facilities available in the sub-municipalities, such as proximity to services (doctor, pharmacy, cash withdrawal), basic shopping facilities (bakery, butcher, local store).
Goverding and Schindelbeek are thus typical sleeping villages (monofunctional = sleep only) due to the limited scope of their facilities, which makes the residents highly dependent on cars.

There is no social vision in housing policy
Residential offer should take into account demographic development and family structure. Here we are considering an aging population (55% of the population is over 40), young families, newly formed families, single parent families (10%) but also affordability and ownership status.
Groen Geraardsbergen notes that (recent) construction projects focus mainly on the middle class and little on the lower income groups. Little attention is paid to social inequality in urban areas.
Therefore people/families who cannot have their own home should also be taken into consideration.

Geraardsbergen makes it easier by saying that they have already achieved the social objective (= social housing to be achieved).
In large construction projects, people hide behind technical arguments “the land is smaller than half a hectare, the project does not provide for allotments or collective housing of 10 or more plots of land for housing, does not contain 50 or more apartments.” In these cases, a modest width of housing should not be achieved.

Softening is a must
As a result of global warming, we will increasingly experience rain and thunderstorms.
Then Groen Geraardsbergen also urges local policy to allow solidification only when there is no other option. Work must be done on the absolute freezing of construction in valleys, nature and areas prone to flooding.
Danny Baeten of Aquafin says: “Handling rainwater sensibly means that you collect and store as much as possible on site. The only requirement is that you provide enough space for rainwater by approaching the layout of the environment in a thoughtful way.”
When developing a vision regarding future housing policy and spatial planning, addressing sclerosis is a priority.

Towards a basic policy
If it is necessary to look for growth potential, we should focus on the station villages. Here, work must be done on intensification (smaller plots/houses) and at a short distance from the primary centers of gravity (including school, doctor, pharmacy and shop). Paying attention to the quality of slow roads should reduce travel distance and encourage pedaling and walking.

See also  Wingene and Ruiselede launch joint merger website, referendum not on the agenda: "Population is divided over which partner is best, so we had to choose anyway" | wingen

Former master builder Leo van Broek made a strong call to intensify housing in towns and village centers and to return space in rural areas to nature. In those residential areas, people have to find what they are looking for now in the countryside and outback: peace and quiet, green spaces, privacy, and space for children to play.

Focusing on the aging population
We determine the trend of aging. We will have to focus on care and support. Air-conditioned homes close to a hospital, residential care center, and day care center should keep older adults in their familiar environment for longer, rather than moving them into expensive service apartments.

Here the concept of kangaroo dwelling is definitely worth considering. A kangaroo house is a combination of two (detached) homes or two condominiums under one roof. It arises from informal care where family or friends want to live next to the person(s) who need or need care. But it could also be a young family with the elderly, with a grandmother and/or grandfather who might also play a role in taking care of or babysitting grandchildren and animals, as a babysitter, or perhaps shopping and helping with laundry and ironing.

Gain insight into the potential for spatial densification of buildings and use of space
It is important that the local policy contains an overview of the following key relevant figures: dwellings per hectare, density of construction, surface hardening, permeable surface, surface area of ​​environmental value or protected green space. This should be related to the usable vacancy inventory.

Groen Geraardsbergen argues in favor of a futuristic vision of housing. This depends on the needs of the population. They are the first to participate. The city must not allow itself to be guided by a predetermined pattern that threatens to think of possible solutions.