Herbivorous insects are in most cases closely related to the plants they feed on and often can survive only on a limited set of host plants. This includes the larvae of many butterflies and moths, one of the largest groups of animal species on Earth. These species usually contain one or several plant families or genera that act as host plants. But there is still much to learn about how such ecological relationships emerged between butterflies and their host plants. In the middle of the last century, biologists Ehrlich & Raven discovered that plants’ chemical defense against caterpillar feeding plays an important role in the ecological interaction between butterflies and their host plants. Chemical defenses, secondary metabolites, are an important form of protection against herbivores. Think, for example, of the bitterness of Brussels sprouts, which originated as an anti-nutritional against, among other things, cabbage white larvae. All plants produce such defenses, and they are one of the largest sources of natural compounds on Earth.

Researchers from the University of Wageningen Biosystems, Plant Ecology and Nature Management Chair Groups, along with De Vlinderstichting, investigated whether shared chemical characteristics underlie host plant usage patterns among Northwestern European butterflies. When comparing plant families with different defense compositions, the researchers found that different defense compositions coexist with different combinations of larvae. In addition, the chemical profiles of the host plants, and thus defense strategies, were found to be inconsistent with the genetic relationships between plant families. 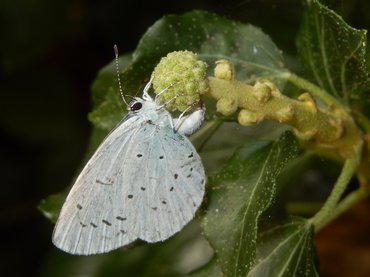 In general, the similarity of butterflies between any two host plant families appears to depend more on the common chemical composition than on the genetic relationships shared between the plants. This pattern suggests that the richness of butterflies, and possibly other herbivorous insects, in a given habitat, depends more on the diversity of phytochemical profiles than on the diversity of plant families and species. This provides a chemical explanation for the diverse plant families sometimes used as host plants by butterfly species. Thus, this study contributes to unraveling the complex relationships between insects and plants and understanding the origin of the great species richness of both groups.

Annona de Wever responds to the uproar: ‘I was angry and tweeted an oversimplified message’