The Norwegian Forest Cat is a majestic breed that looks a lot like the Maine Coon. The resemblance is uncanny that many folks have confused these felines with the other.

Let’s begin, shall we?

This tabby is known as the Norsk skaukatt or Norsk skogskatt in Norwegian.

This breed originated from Northern Europe which is known to be very cold, but thanks to the adaption of the kitty, it is able to live in such a cold climate without much fuss. This is a function of the glossy long topcoat, wooly undercoat, and water-shedding hair which its sports that provides it with enough insulation against the cold.

It is speculated that the ancestors of this feline might have been white and black short-haired British landrace cats that were brought by the Vikings into Norway a little bit after the year 1000 AD. These Vikings were also said to have brought long-haired felines that could also be the ancestors of this breed as well as that of the modern Turkish Angora from Turkey and the Siberian from Russia.

Apart from the cats brought by the Vikings, Crusaders in the 14th Century also came into Norway with some long-haired cats. It is very likely that these short-haired and long-haired kitties mated with the feral and farm felines. The product of this mating exercise then evolved to the Norsk skogkatt that we have today.

According to Norse legends, the Norsk skogkatt is described as a fairy cat dwelling in the mountain that can climb vertical rock faces impossible for other felines to climb. While this might be a bit of an exaggeration, it is not untrue that the Norsk skogkatt is an excellent climber. The Norse legend is true to a large extent as the tale about the skogkatt might refer to the modern-day breed’s ancestor. Visit https://www.worldhistory.org/article/1836/ten-norse-mythology-facts-you-need-to-know/ to check out some Norse mythology facts that you should know.

As we mentioned earlier, this feline’s ancestors came by ship to Norway as they traveled with the Vikings. Hence, it is safe to assume that they acted as mousers on those ships. In other words, they caught rodents that were on the ship.

The reason the word “forest” is part of the name of this feline is that the initial landrace ancestors dwelt in the forests of Norway for several centuries. Their move to becoming domesticated was because humans discovered their hunting ability. Hence, they were taken to live in farms where they served as mousers once again They served in that capacity until cat enthusiasts found them in the early 20th century. 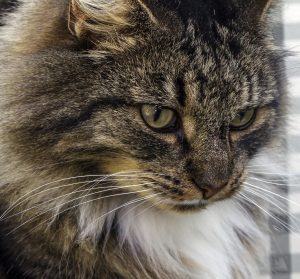 This feline almost became extinct during World War II as they cross-bred with other domestic cats. Thankfully, the Norwegian Forest Cat Club was able to start a breeding program to preserve this breed. This club was dedicated to this breed and started in Oslo, Norway.

King Olav V around the 1950s declared this kitty as Norway’s official cat. Click here to find out more about King Olav V. Since this feline remained only in Norway, it wasn’t recognized as a bred.

However, the registration of this breed happened around the 1970s under the Fédération Internationale Féline which was the cat registries federation of pan-Europe. This registration was thanks to the effort of a Norwegian named Carl-Fredrik Nordance who was a cat fancier.

The American Cat Fanciers Association registered this kitty as a breed during the 1970s. Sweden also recognized it officially as a breed in 1978, and the Norwegian Cat Club of Britain based in the U.K in 1989 also accepted it as a breed.

See also  US and UK oppose Russia over Navalny: 'Perverted and Kafkeski'

Among some fancier organizations and breeders, “Norsk skogkatt” is the name used to refer to this breed.

This feline is well-known in Norway, Sweden, Denmark, Iceland as well as France. It is recognized as the 5th most popular kitty in France. It has a recorded yearly birth of about 400 – 500 in France.

The Norsk skogkatt has a strong build and is bigger than your average tabby. Adult females have a typical weight of 8 to 18 pounds (3.6 to 8 kilograms). The males, on the other hand, weigh about 10 to 20 pounds (4.5 – 9 kilograms).

They possess long, strong bodies, long legs as well as shaggy tails. Its coat is long thick, glossy and the top layer repels water. It also has a thick undercoat which is bushiest at the chest, head, and legs. The undercoat on its chest when looked at resembles a ruff.

It has a long equilateral triangle-shaped head with a sturdy chin as well as a medium-length muzzle. Any skogkatt with a round or square-shaped head has a defect.

The eye color can be any type, but the eye shape is either oblique or almond-shaped.

They have large ears with a wide base, a high set, and a tufted edge. The ears are placed on the head like that of a lynx.

The coat colors of mink and sepia are the generally accepted coat colors.

They can live for as long as 14 to 16 years under the right condition.

In this article, we have discussed the history of the Norsk skogkatt. We also gave a brief physical description of this kitty.